Autism Wiki
Register
Don't have an account?
Sign In
Advertisement
in: People on the autistic spectrum, Living people

Matthew "Matt" Savage (born May 12, 1992) is an autistic savant with excellent musical abilities. He was born in Sudbury, Massachusetts, and her parents are Diane and Lawrence "Larry" Savage. He learnt to walk very early, and by the time he was eighteen months old, he started reading. At the age of three, he was diagnosed with pervasive developmental disorder, a form of autism. Over the years, he became an accomplished musician and musical composer. Some of the highlights of his early accomplishments include:

Bobby Watson, a noted figure of the world of jazz had once remarked about Matt Savage: "Besides being an extremely gifted pianist and improviser, Matt has the musical instincts of a person many years older. To me this is the most incredible characteristic about Matt."[1] 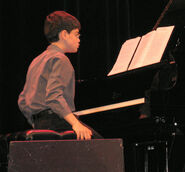