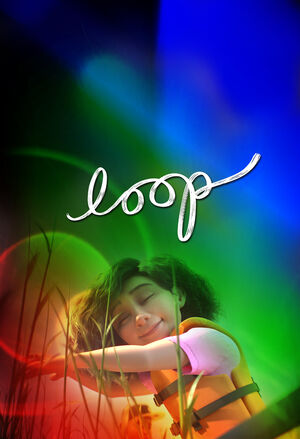 Loop is a short film produced by Disney Pixar as a part of the SparkShorts series of experimental shorts. It is about a neurotypical boy and a nonverbal Autistic girl who go on a canoe trip.

The short takes place at a camp. Renee, an Autistic girl, is playing with a sound app on her phone. She is sitting in a canoe by herself because nobody wanted to be her partner. Marcus, a neurotypical boy, arrives to the camp. He is late, and the camp counselor forces him to be Renee's partner. Marcus is initially very annoyed by this. He attempts to talk to Renee, but she cannot speak and only makes muttering and moaning noises.

Marcus starts to paddle the canoe, but Renee lets him know that she has to go to the bathroom by showing him the poop emoji and pointing to the outhouses. Marcus then paddles back to the land, but then they pass by reeds. Renee reaches her arms out to touch the reeds and let them brush on her arms. She then makes Marcus paddle around the reeds several times. But by the time Marcus tries to do the same thing, Renee goes back to her phone.

Renee is using the sound app again. Marcus paddles through a sewer tunnel and Renee replays the sound within the tunnel. While she enjoys it at first, a motorboat passes by and she gets overwhelmed by the noise and has to leave the tunnel. Marcus then paddles out of the tunnel and goes back to the land. An angry and overwhelmed Renee throws her phone into the lake, hides under the canoe, and begins to cry.

Several hours pass and the time is seen changing. Marcus then goes back to Renee and asks if she is okay. She goes back to playing with the reeds and starts to laugh. The two start repeating the sound the phone made as Marcus paddles back to camp.

The post-credits scene shows Renee's phone sitting in a glass of dried rice, which is meant to take the water out of it. The phone then receives a message from Marcus, who sends a message asking if they want to go paddling again.