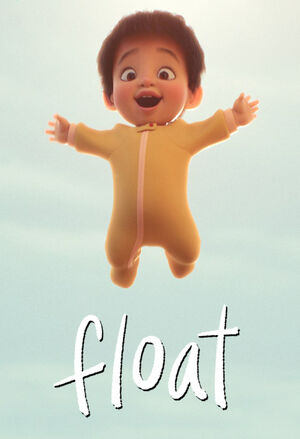 Float is a short film produced by Disney Pixar as a part of the SparkShorts series of experimental shorts. While the audience had different interpretations of film, it is meant to be an allegory of a parent who has a child with a mental difference, such as Autism or ADHD.

The film begins with a father in the front yard of his house, playing with his baby son. The son, named Alex, begins to float away. The father notices people walking by, so he grabs his son, hides him, and brings him inside.

The film then fast-fowards four years later, and Alex is still floating around in the house. It is implied that the father has become more reclusive and that he refuses to go outside because he doesn't want people to see his son floating. He then decides to take him to the playground. He puts Alex on a leash and gives him a backpack filled with rocks.

While at the playground, the father watches his son. He notices that his son is floating and chasing the other children around the park. He then grabs his son and yells at him "Why can't you be normal?", which is the only spoken line in the film. Alex starts to look at the ground and cry.

The father then feels bad, so he decides to hug his son and take him to play on the swing. He now accepts that his son can float and allows him to float freely in the park.

The film ends with a dedication to the producer's son. He created this film and based it on his own experience with an Autistic son.